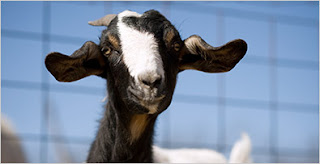 The reality of a collapsing industry has really been putting the screws to the Times recently, resulting in a general laxness of tone in the Cultural and Arts sections, where writers crack wise in (often) misguided attempts to sound casual and relevant. They've started reviewing rap mixtapes. A few months ago they used the phrase "would inspire even the Easter Bunny to absinthe and Emocore." Now this:

"I found myself telling him [a butcher]: “Koreans think eating goat soup increases virility. It can lead to better sexytime.”"

Seriously dudes, a Borat reference? Saying this (to a stranger, no less) is bad enough, but writing it down in a piece, submitting it, and then having it get by an editor? Astounding. The wackiness continues with this semi non-sequitir:

"Shortly into this process, a friend asked me, “Is it gay meat?” Confused, I said, “There’s nothing gay about it at all.” She explained, “No, I said is it gamey?”"